There are three variations of the Blade 6 generation of dartboards manufactured by Winmau. The regular Blade 6 (single core), Blade 6 Dual Core, and Blade 6 Triple Core all appear to be of high quality and cleanliness. Let's take a closer look at what makes them unique and what you may anticipate. 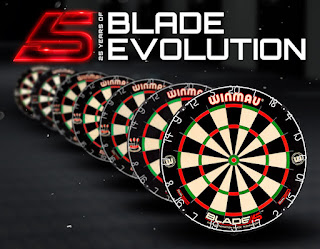 An Overview of Winmau Blade 6 Dartboards

The Winmau Blade 6 dartboards are made of high-quality sisal fibers that have a consistent density and are very good at self-healing.

The new Blade 6 wire is intended to be smaller, more robust, and less susceptible to bounce-outs. There are no staples or anything like because the wire is incorporated within the fibers. Around the holes, the fibers will be less tightly packed, making it easier for darts to go through the surface.

The Rota-lock enables you to attach the dartboard to the wall and spin it without removing it from the wall. Because each lock is adjustable, the darts can also be fine-tuned and leveled on uneven surfaces. The rota-lock system won't change your ability to turn the dartboard because it won't stop it from turning.

The colors on the Blade 6 are pleasing and in no way distracting. The red and green regions on this dartboard are a bit softer than the normal deep red and green hues. The black and white portions look fantastic, but the texture is a bit scratchy.

Below are more details about the Blade 6 dartboards and how they compare to each other.

The typical Winmau Blade 6 dartboard consists of a single layer. It includes Rota-Lock mounting hardware and wiring of the latest generation. The typical Blade 6 features cracks, which is totally common for dartboards made from sisal fiber. Due to the extra layers, there are no cracks on the Blade 6 Dual Core and Triple Core.

Similar to the Blade 5 Dual Core, the Winmau Blade 6 Dual Core has two cores. The outside core is softer, allowing the darts to sink in smoothly, whereas the inner core is denser and provides the dartboard with greater durability. It has a standard number ring, better wiring from the latest generation, and a Rota-Lock method for mounting.

The Blade 6 Triple Core is the first dartboard offered by Winmau with three cores. layer of carbon fiber for increased durability and longevity, as well as laser-cut number ring. Since it is gray, it does not stand out and is not at all distracting. To make sure the dartboard is level, you can put the spirit level in the 20-point scoring area.

What are the three cores in the Winmau Blade 6?

The three cores of the Winmau Blade 6 Triple Core are meant to operate in three distinct ways. The first outer core has a reduced resistance, allowing for quicker penetration, whilst the second outer core has a higher density, preventing darts from falling and enhancing their overall longevity. The third core is composed of carbon fiber resin, which boosts durability.

Is the Blade 6 Triple Core worth it?

The Blade 6 dartboards are of such high quality that there really is no room for complaint. The greatest disadvantage, however, is their price, which can be worthwhile if you do not mind spending a bit more than normal. The Winmau Blade 6 has just recently been released, so it is too soon to say with certainty how effective the additional carbon resin coating is and whether it will hold up over time.

When was Winmau Blade 6 released?

The release of the Winmau Blade 6 occurred in October 2021. There are three versions of dartboards in this generation: single core, double core, and triple core.