Although the origins of the game of darts are not clearly documented, the history of darts undoubtedly started with throwing sharpened spikes or even knives at a cross-section of a tree trunk. These concentric circles can still be seen in various forms of dart board today and obviously in the bullseye at the heart of a modern dart board. 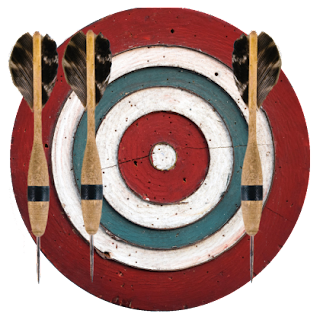 The modern dartboard with segments numbered one to twenty dates from an original design by Brian Gamlin at the end of the nineteenth century. The positioning of the other numbers in relation to the twenty at the top has varied over the years before settling on the current form. The standard throwing distance from oche to board of seven feet nine and a quarter inches was fixed in the 1970s for international competitions.

The history of darts has also seen equipment change radically. Darts currently have a maximum possible length of 12 inches and weight of 50g. Steel tip darts tend to be between 18-30g for most players whereas soft tip darts tend to be a bit lighter at about 16g. Weight is really a matter of personal preference for most players and only becomes more important for professional who are looking for tight grouping in their three throws. Normally a larger flight is required for a heavier dart to maintain a proper trajectory.

The history of darts has been marked by some great personalities. Some of these larger than life figures have been as interesting away from the board as in front of it. Obviously Phil “The Power” Taylor and his 17 world titles has dominated the professional game for 20 years, but looking back a little further, Eric Bristow was probably the one person to bring darts from the pub to the television screen. He was the first player to be really popular even among those who knew nothing about the game and is a candidate for the best-known player in the history of darts.