How to Play Around the Clock Darts

Around the clock also known as “around the world” is one of the game variations you can play in a dart.

Around the clock dart game can be played as a single player for practicing to increase their accuracy, or any player can join and compare their score to determine a winner.

Around the clock is a fun game to play with your friend even if hey never play dart before. It's easy to keep track in scoring as everyone just to remember what number they are currently on.

How to Play Around The Clock 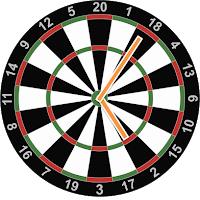 The aim of around the clock game is to hit every single number on the board, plus the bull-eye before other players to win.

Each player can take the turn to throw three darts. But instead of aiming to gain as many points as possible, you’re aiming for specific numbers. Starting with one and then two and then three… And so it goes.

For example, if the first three darts have hit three consecutive numbers, then the player will attempt to hit numbers 4, 5 and 6 on their next visit to the board. You cannot move onto another number until you have hit the number you are aiming for, and numbers must be hit in the numerical order.

Keep going until you hit the 20 and then go for the bullseye. Bag all twenty numbers and then the bull and you’ve won!
See also How to Play Beer Darts


If the player is unequal skill, you can start by limiting the scoring zone for the advanced player to make the game more competitive. For example, the advanced player must hit the specific ring to score, while the weaker player can hit on any area.

If the player has equal skill, you can set the rule to hitting only double. Or to make it even harder, each player must hit all three segments of a particular number before moving on. This is known as “Shanghai” (the double, the single, and the treble). This is a method of around the clock that is only for advanced, serious darts players!

Around the clock is one of the most popular dart game around. It has many variations that can be played, whether it is for practice or just for fun with your friend. Read also distance for a dart board