The Viper 777 electronic dartboard is designed with a regulation sized 15.5" target face and a bright LCD display that delivers a crisp, clear view of scoring and statistics; eliminating manual scorekeeping. Surrounding the target face is a large missed dart catch ring which offers protection for your wall from errant throws. See also Viper Dart Boards 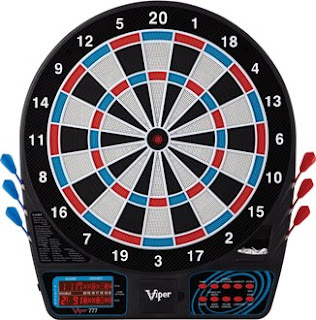 The Viper 777 is intended to be used with soft tip darts and features 43 games with 320 options; accommodating up-to 8 players. Popular options include cricket, 01, single in/out, double in/out and double bull. This electronic dartboard includes 6 starter darts and mounting hardware and is equipped with a bilingual voice option, configured for English and Spanish. The Viper 777 requires 3 AA batteries or the use of an external power supply adapter (5V, 1000 mA) to operate, which are sold separately. GLD Products proudly stands by the quality of their products, offering a limited 1 year manufacturer warranty.

The Viper 777 Electronic Soft Tip Dartboard is not much of an advancement from that model. The sounds are sampled, the display is LCD segmented instead of LED, and it has sampled voice prompts in two languages, English and Spanish. I would certainly expect that after 17 years of progress, but let's just say that the technology hasn't followed Moore's Law—these are very modest advancements.

You get a plastic board, regulation size, with a catch area surrounding the target ring for close strays. This surround will catch near-hits, unlike the classic round dartboard, but of course you're working with soft-tip darts. Also in the package, you'll find parts for six darts that Viper calls "all-in-one." A molded, fixed plastic flight and a ¾-inch soft tip screw onto a metal knurled body. These should be considered starter darts so you can check the function of the board; they remind me of toy darts, and you'll want to get a set of nice darts with detachable flights. Do note, though, that Viper specifies the short tips, which can be bought in bulk lots of 100 or 1,000. Mounting screws and a couple of plastic anchors are also included, along with a thick instruction booklet in English and Spanish. You need 3 size AA batteries or a 5 volt transformer to power the unit.

The physical setup includes storage slots for six darts, and a tray for spare tips.

It is fairly easy to get the board ready for a game. When you power on, the board defaults to a 2-player, count-up to 100 game. A major weakness of the interface is that if you like playing, say, game 37, you'll need to press the game button 37 times—each time you power on the board. This could have been avoided by including "up/down" buttons in the interface to allow incrementing or decrementing the game number.

In any game (1-, 2-, or any number up to 8-player), a "NEXT" button must be pressed between players. Presumably this is to avoid accidental scoring while removing darts.

Two other faults I noted: it is very unclear how (or if) the volume control works. Holding it down produced an error code that is explained in painstaking detail in the booklet, but no difference in the rather soft volume level of the prompts. The other is that, while the English prompts seem clear, the Spanish prompts are not. It took me several tries to make out the word "jugador" when the Spanish voice was announcing which player was up.

On the plus side, darts for the most part did not bounce out unless they were supposed to (because they hit a border). As with most boards of this style, it's easy to increment your score by tapping a target with your fingertip. If you bounce a dart and it scored (and you're playing according to rules), a "bounce out" button allows you to decrement that score.

This seems like an "okay" dartboard if you're not expecting much, or if you've never played. Buying better darts would be a wise purchase, and it's too bad that GTD chose to bundle such cheap darts into this package.