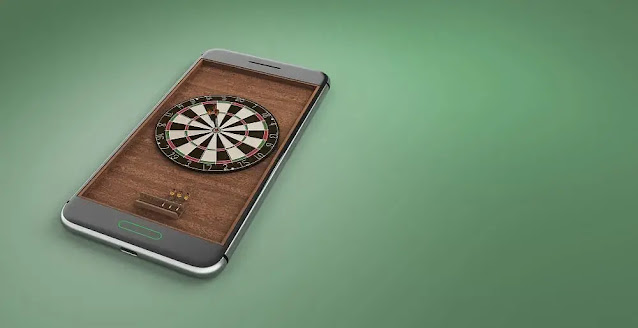 The standard scoring for darts is: players start with 501, then subtract the round's collected score from 501. The first to zero wins.
Dart scoreboards are almost as old as darts themselves. Dart scoreboard applications are now available, marketed as "the revolutionary way of scoring darts." Let's review a few of these apps.

Joris Dijkstra's app includes a basic interface with large fonts for easy reading. Even if you don't upgrade to the ad-free version, you won't notice the ads.
The app has three upgrade options: remove ads; game extender, which adds up to 6 players and a 1001 game type instead of the usual 501; and data upgrade, which preserves all past games.
A helpful app that doesn't try to do too much. It offers a clean, beautiful interface with smooth transitions between settings. For a small app, this one does practically everything perfectly.
Get it on Google Play
Available on the App Store

Vincent Roest created this app using the idea of a bar's dart board cabinet. The complete interface has a wood background, which is pleasing to the eye.
There are four game variations: x01 is a typical round of darts, Cricket is a race to be the first to open or close all the cricket numbers and score the most points.
The score looks legitimate with a board and chalk, and it's in a charming font. Typing the scores feels cumbersome and has a tiny latency.
Overall, a good dart scoreboard app. It doesn't have out-of-place gimmicks. It accomplishes its job well.
Available on the App Store

Easy Darts Score is one of the most user-friendly dart scoreboards. The UI fills the phone's screen perfectly.
A simple game of darts. You can play with up to four players and alter the number of legs to win, making it a night game or a quick game.
The only drawback is the 1-2 second delay in scoring because the deducted score flashes and fills the screen. A minor flaw, yet some users are picky about the programs they download to their phones.
There's only one upgrade, and it removes ads. The ad pop-up is almost non-existent, so the update is just for users who desire the security of having no ads interrupting their games.
Get it on Google Play
Available on the App Store

App by Deucks Pty Ltd. This app is really simple to use, just enter the players' names and start playing.
The lack of a score button can be perplexing. Players must figure out how to subtract their points by clicking on buttons.
Unlike most dart scoreboard applications, this one has ads. A video ad appears when you select options like finish game or main menu.
The Darts ScoreBoard app also has a limitation of only two players at a time. No 4 or 6 player choices.
The UI is easy to read due to the lack of conflicting colors. The hues are bright and energetic. Also, some players like the simple approach of the Darts ScoreBoard app.
Available on the App Store

The app asks for the user's preferred language right from the start. The user can create an account or log in if they already have one. This is to track the player's skill improvement.
Some users find gimmicks like lessons on how to use the app a positive. However, most users want to utilize the app right away. Not to worry, you may skip the instructions and start using the app right away.
Standard Match, Cricket, Singles Training, Doubles Training, Bob's 27 and Score Training are the six game styles.
This app is useful for new players who wish to practice before a competition. The free version of Dart Counter includes ads. This app's ads are less intrusive than most free apps.
Get it on Google Play
Available on the App Store

Michael Chernikov has created a stunning and simple app. Opening the app leads you to a dartboard, where you simply drag your finger to the screen where you landed in the real world, and it automatically calculates your scores.
The app's simplicity will appeal to most users and keep them coming back. It also features a similar-looking settings menu for iOS users. This app is great for all ages and all levels of dart users.
Available on the App Store

Darts Scorer 180 is one of the most visually stunning dart scoreboard apps available today.
The interface's cold colors go well with the text's black typeface. Also, there are numerous choices for customizing the UI.
The game variations include x01, a normal game, cricket, and training. Adding scores appears to have a tiny latency during play, although most users won't notice. The button interface is quite familiar and easy to understand.
The app may be upgraded to include no ads, unlimited dart bot games, and all future pro features. The upgrade is reasonably priced and available in monthly or annual installments, which most users choose.
Overall, the Darts Scorer 180 is a nice-looking app with easy controls for all darts players.
Get it on Google Play
Available on the App Store

The conventional dart scoreboard just shouts fun. No outside factors to disrupt the game or interrupt it while your companion reads his/her alerts. There is no need to utilize a traditional scoreboard over an app, but consider this. Why would you want to disrupt the game of darts to type on your phone?
Using a classic dart scoreboard or an app version will be determined by the players. They can use an app if they choose, although some old-timers prefer the traditional dart scoring method.